As part of the fund-raising by the Trust for the floodlight upgrade appeal, there will be draw tickets on sale at the friendly match against Torquay United. The Trust prize draw will celebrate the 100 years anniversary of the tour of South America by Exeter City.

Prizes on offer include:-

The star prize being a morning out at the Cat and Fiddle training ground as the guest of Paul Tisdale to meet the squad.

Tickets are on sale for a pound each. A pack of ten draw will be on seats in the WTS stand (the OG is closed tomorrow). It is hoped that volunteers will be around the Big Bank for supporters to collect packs of 10, so make sure you have a tenner with you, and a pen to fill in the stubs. The stubs and money can be given to the Brazilian Parrot, which happens to be a dressed up Trust Board member, Andy Bratt.

The draw will take place on Monday 11th August.

If you’re not at the match, but still want a ticket, then the Supporters Club will sell you draw tickets on-line, they available at http://www.exetercitysupportersclub.com/supporters-trust-draw.html 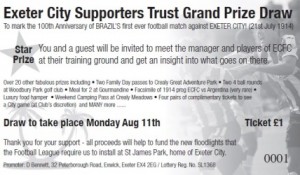