To the delight of Exeter City fans, the Club Chairman Ed Chorlton OBE has stood down. A master of the Powerpoint presentation and a supporter of Manchester United, but completely unable to connect with City fans. The Trust Board finally getting frustrated at the lack of progress on ground redevelopment and the missed opportunities for advancing those plans.

Exeweb.com called for the removal of the Chorlton by the Trust Board at the last meeting, read here, and so our wish has been granted. It is worth re-iterating that the Trust Board needs to say something very soon. That should include whether they did have a vote of confidence in Chorlton, as suggested by the former Club Secretary, or not, and if there was such a vote how that vote went.

This is the brief statement on the Club’s website:-

Edward Chorlton OBE has decided to stand down as Chairman of Exeter City AFC with immediate effect following speculation in the press. 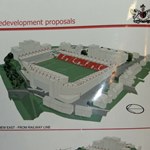 Mr Chorlton wishes Exeter City AFC well in the future. He says the Club has a professional Board of Directors, an outstanding manager, a very talented young team, and a group of hard working staff.  He thanks them for their support and friendship over the last four and a half years and wishes the club and its dedicated supporters a very successful 2014/15 season.

The two matters that the Trust Board need to urgently disclose are:-

There has to be some merit in having a joint Chairman of the Club and the Trust, again. Is Laurence Overend the best person for that role though, or even does he have the time to be fully effective in that role? It would be helpful if that discussion was with the members of the Trust.

A rethink of the plans for redevelopment is needed. That rethink has to include the business risks in halting all plans for the foreseeable future. More openness is needed, though the blame game of laying it at the doors of Exeter City Council or Devon County Council may not be that helpful. Was an error of judgement made in relation to the decision that student accommodation on the St James Park site was not viable?

The next few weeks will be interesting.