Having been released by League 2 Cheltenham Town at the end of last season, there has been much speculation as to who Jamie Cureton, 38,  would be joining. Bristol Rovers seem to be the best candidates, read more here, but he played for Dagenham & Redbridge during the week in a pre-season friendly, and it’s them that Cureton has signed for.

Dagenham & Redbridge have today announced that former Exeter City striker Jamie Cureton has signed a one year deal with them.

His 250th career goal came against Dagenham & Redbridge last season while playing for Cheltenham Town. Exeter City fans will get a chance to see Jamie Cureton in action on Friday 3rd October when the Grecians visit Victoria Road for a League 2 game, or at St James Park in the last game of the season on Saturday 2nd May. 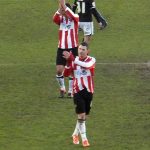 Speaking to the Daggers website, Jamie Cureton had this to say on his move:-

It was an okay season [last season at Cheltenham], I’m one of those people who is always pushing himself to get more and I hope to get more goals than I did last season.

Wherever I go, everyone expects goals, but I think I put more pressure on myself than anyone else does.

I’ve had a good pre-season here and that’s one of the reasons that when I was offered a contract I was happy to sign. The lads have been great, so I can’t wait to get going now.

I felt confident I could still do it in the League, especially with the way the season ended for me. It was a big decision for me to stay in League football, but I still feel fit enough to carry on and score goals.

Previous: Danny Coles Reprimanded for Social Media Use – Again
Next: Coles Defends Use of ‘C’ Word on Instagram