Today (June 26th) marks the eighth anniversary of the appointment of arguably the most successful manager in City’s history. Paul Tisdale, despite a loan spell at City in the late 1990s, was considered the outsider for the job by the supporters amongst a shortlist that contained City legend Shaun Taylor and Jimmy Quinn, who had taken Shrewsbury to promotion back to the Football League two years previously. However, the Team Bath manager did enough to convince the board that he was the man for the job filling the post vacated by Spurs-bound Alex

Inglethorpe.It was an appointment that failed at first to resonate with the supporters, especially after a sluggish start to the 06/07 season that saw City draw too many games for the fans’ liking. However, form picked up as the season went on, culminating in City making the playoffs. A memorable penalty shoot out win at Oxford saw City play at Wembley for the first time; however, the promotion dream was quelled by a 2-1 defeat to Morecambe.Undeterred, and despite losing several key players to Paul Buckle’s Torquay, City made another bid for promotion, qualifying once again for the playoffs. At 3-1 down on aggregate away to Torquay with 20 minutes left all seemed lost, but a devastating end to the game saw City notch four times and book their place at Wembley once more. This time there was no heartbreak as Rob Edwards’ header saw City past Cambridge.The first season back in the Football League, 2008/9, saw City place firmly amongst the also-rans with the bookies, and a slow start to the

season did nothing to dispel this. However, City supporters by now had become used to Tisdale’s side picking up the pace in the second half of the season, and suddenly there was a runaway train of momentum meaning that City entered their final match of the season at Rotherham needing a win to confirm back-to-back promotions. Richard Logan, whose header put City in front at Torquay the previous year, came up trumps again with the only goal at the Don Valley Stadium.City couldn’t have wished for a more daunting start to life in League One, but showed their mettle away to Leeds before going down to an injury time defeat. The season would prove difficult given City’s relative poverty and by the end of February things looked very bleak indeed, but the loan signings of George Friend and Ryan Taylor seemed to spark a recovery, City losing just once in their last 13 games. Even then with 10 minutes to go City were down before Ryan Harley scored a spectacular winning goal against Huddersfield. 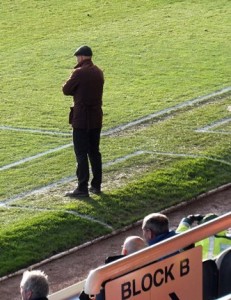 The 2010/11 season started in despair with the tragic death of Adam Stansfield, but ended with City equalling their highest finish in the four-tier era, another fine late season run ensuring an 8th place finish. Sadly this would prove to be a high water mark, as City lost the spine of their side to bigger things and struggled to recruit adequately in their place. Relegation wasn’t thought possible in August but was confirmed with a thrashing at Carlisle. Off the pitch there were signs things were going somewhat awry, with major budgetary constraints forcing Tisdale’s hand.Back in League Two, City embarked on a campaign aimed at getting back into the third tier at the first attempt, and thanks to the goals of Jamie Cureton were in the hunt for the majority of the season. However, when his goals dried up so too did City’s fortunes, and a shocking run of one draw from the last eight games ensured City finished well off the pace in 10th.With further cutbacks hitting the squad, including the loss of Cureton, City started positively but fell away dramatically in 2013/14, never dropping as far as the relegation zone but only confirming their safety with a stunning victory over promotion-bound Scunthorpe on the penultimate Saturday of the season.

So, Tisdale enters his 9th year in charge of City at something of a crossroads. While most supporters appreciate the constraints he has had to work under and point the finger instead at the board, Tisdale’s stock is probably at its lowest point since midway through the 06/07 season, and he needs to do a lot to win back the trust of large chunks of the City support. Whether Tisdale gets to celebrate his 9th anniversary in charge next season will depend on whether he can take his young side and mould the promise shown by them last season into a decent outfit at first team level. If he can, then the second longest serving manager in City’s history could start to cast glances at the all-time record held by City’s first ever manager, Arthur Chadwick.

The BBC announcing his appointment http://news.bbc.co.uk/sport1/hi/football/teams/e/exeter_city/5094830.stm