Ocean. 1162km from the capital Brasilia, and 442km from São Paulo. The City has 6 million residents.

It is famous the huge statue of Christ the Redeemer which sits atop Corcovado Mountain and is 710 metres above sea level.

The coast of Rio is 197km long. The best known industry for this City is tourism.

The City has a metro system for transporting you around the City. On match days travel will be free for

holders of a match ticket. The two metro stations for use in getting to the Maracana Stadium is Maracana Station or São Cristovão Station. Further information here. An English version is available.

The Maracana Stadium.
Address: Rua Professor Eurico Rabelo, Maracanã, Rio de Janeiro – RJ, 20271-150
Getting There: Metro to Maracana Station or São Cristovão Station depending on where in the ground you are.
Eating and Drinking: Better off in one of the tourist areas rather than near the ground.
Capacity. 78838
What’s the stadium like? A major reconstruction from the stadium that was opened in time for the 1950 World Cup. 95% of the seats will be covered by the new roof.The seating is a single tier bowl.

Seats are coloured blue, yellow and white.
Club side: Fluminense.
Some facts: 292 lavatories. 110 executive boxes. 4 big screen. 60 bars and snack bars. Parking for 358 cars.The first row is 14m from the pitch. 4 changing rooms.  The rain water is collected and used in the toilets.

World Cup games at the stadium 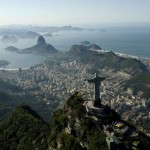 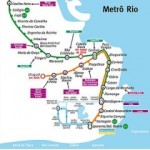 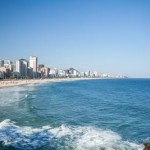 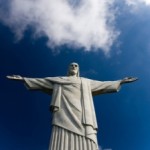 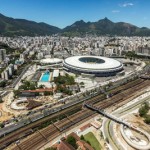 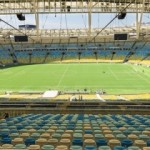 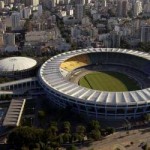