Devon and Cornwall Police is launching its annual summer drink and drug driving crackdown and with the FIFA World Cup less than two weeks away, football fans will be targeted.

The summer crackdown will start on Sunday, June 1, 2014. The D&C constabulary warn of the consequences of driving while over the limit the morning after drinking are a particular focus of the campaign with late night World Cup matches, including England games, taking place from Thursday, June 12.

Few people fully understand the social and personal consequences of being caught drink or drug driving. It is clear many hear about the risk of crashing while driving impaired, but some still fail to act appropriately and have utter disregard for road safety and the lives of others.

The increased likelihood of involvement in a collision means a high risk of death or serious injury. If stop checked and found over the limit, the social consequences will 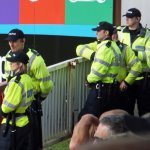 severely impact on an individual’s life through the loss of a driving licence and possibly employment and potentially your home.

Devon and Cornwall police reminds us that those convicted of drink driving can expect to be banned for at least 12 months, receive a fine of up to £5,000 and/or six months in prison. Collisions resulting in a fatality, where the driver is under the influence of alcohol, can carry a penalty of up to ten years in prison.

It is crucial drivers heed the message and understand the consequences of driving while still unfit through drink. We want everyone to enjoy the World Cup but the scheduling times of some matches means there is potential for people to drink later into the night. In the morning they may drive at the normal time without considering whether they may be over the drink drive limit.

The consequences of making a choice to drive whilst unfit through drink or drugs are serious, for you, your family, your friends and for the rest of your life. I urge anyone to

think incredibly carefully about driving if they have consumed alcohol or drugs. The risks are certainly not worth taking. The potential is you could take a life, yours or someone else’s.

Alcohol can remain in the system for a long time after you’ve had your last drink, something many of those who drive the morning after don’t count on or realise. If anyone is driving early the morning following, please drink responsibly the day or night before.