Bank holiday Monday is the day for the League 2 play-ff final at Wembley. The weekend has already provided plenty of entertainment with QPR beating Derby County 1-0 with a late Bobby Zamorra goal, and Rotherham coming back from 2-0 down to win 4-3 on penalties after pulling it back to 2-2 in

normal time and that being the score after extra-time. Can the League 2 play-off game between Burton Albion and Fleetwood Town match that level of entertainment?

43,000 watched the League 1 play-offs, but Monday’s game is likely have attendance under 20,000. Tickets are available at Wembley for those making a late decision to attend. Tickets for the Burton Albion end will be available at Wembley on level B1 on the west side of the stadium and Fleetwood Town’s tickets will be on the same level but on the east side of Wembley stadium.

The game will have goal line technology available, the first time for a League 2 play off game – http://www.exeweb.com/2014/05/24/play-offs-will-feature-goal-line-technology/

winning 1-0 at home and drawing 2-2 at Roots Hall. Fleetwood Town finished 4th and missed out on an automatic promotion place by 5 points.

The 2 teams have met 4 times this season, with the Brewers having the upper-hand over the Cod Army with 2 wins to 1:-

Fleetwood Town’s manager Gary Alexander said ahead of the game:-

We’ve got a great opportunity to do that and it will be a great challenge for us. It’s a tough game against a very good opponent, but we’ve been facing these challenges all 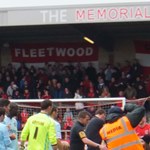 All four of the games against Burton have been competitive, so you know it’s two teams who deserve to be in the play-off final.  I thought the mentality of the players when we won 4-2 at their ground was unbelievable because we were fully in control of the game.

We know that, if we perform to our maximum, we can beat any team, so we have to focus on our own performance and make sure it’s at the highest level we can possibly get it to.’’

It gives you the basis to go on and win games, so we have to make sure we defend with the same intensity and intelligence that we have had in the last two games. Burton have players who can score goals, but we’ve got a very good attacking threat ourselves.

Burton Albion have now been in league 2 for five years having been promoted as Conference champions in 2009. Last season they lost to Bradford City 5-4 on aggregate

in the semi-final. Fleetwood Town were in the Conference North 5 seasons ago. A significant investment in the Club has seen them rise up the divisions. Promoted as champions 2 years ago from the Conference they had a mid-table finish last season.

It’s nice for us to just be on the odds, isn’t it? I think on one other play-off show they talked about the League Two play-off final between Fleetwood and Southend this weekend. So we seem to be getting overlooked slightly, which I don’t think is a massive issue for us.

We’ve been the little club all along in this co

mpetition and we have used that to try and galvanise the players.

I think the fact that you look at Fleetwood as big spender this year – we as staff certainly had them down as one of the favourites to go up automatically – so again if we are the underdogs then we are quite happy with that tag.

So it was important that we made it through to Wembley and now we can focus on what is a great opportunity.

For me and the players it’s a great opportunity and I think it’s really important we embrace that and I think the work we have done over the past few week puts us in a really great position to put in a good performance when it matters.

Previous: Brazil 2014: Gerrard – ‘it’s going to be tough’
Next: Jake Gosling Scores on his International Debut