For Cambridge United it’ll be their 3rd visit to new Wembley for a Conference play off final. This time though there will be no Devon club to hinder their progress back in to the football league. In 2008 a Rob Edwards goal led Exeter City back to league football and the following year Torquay United’s Chris Hargreaves and Tim Sills blocked their return.

This is new territory for Gateshead. 54 years after failing to get re-elected in Division 4 (Peterborough United replaced them) they’ll get an opportunity to return to league football. The Club was reformed in 1977 and were accepted in to the Northern League. Having spent some time in the Alliance Premier League (now the Conference) the drifted down the non league pyramid. With a new board appointed in 2008 Gateshead have returned to the upper echelons of non league football.

Cambridge United finished 2nd in the Conference, and beat Halifax Town 1-0 and 2-0 to earn their place in the final. Gateshead finished 3rd and drew 1-1 with Grimsby Town and then beat then 3-1 at

their own ground to boom their Wembley place. The Us are favourites to win at 11/8, with Gateshead at 11/5 and 23/10 for the draw. Kick off is at 4pm on Sunday 18th May and will be shown by BT Sport. Details of the referee and match officials can be found at http://www.exeweb.com/2014/05/10/skrill-conference-play-off-final/

Cambridge manager Richard Mooney is excited by the opportunity and believes that the Club can push on further:-

The only thing wrong with it is that the first team aren’t playing at the level they should be or want to be. If they can make that step up, everything about this football club is

ready to push on.

I’m not going to make any wild predictions as to how far we can go, but I do think three automatic promotion spots and one out of four in a play-off does make that league a little bit easier to get out of.

The money we can generate by becoming a Football League club, and therefore the funding we get, can only add to that. There’s an incredible responsibility on everybody, we’re all aware of that. We just need to make it happen.” 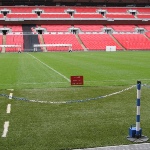 he most important issue yet and that’s two automatic play-off spots and play-offs. Every League club that has come into this league has a problem. “Every club that goes into the next league sails through it. There has to be something wrong with that, and the thing that’s wrong is the promotion rules.”

I think the weather will be a factor. It’s due to be really hot this weekend and I don’t think either team could play at 100 per cent tempo for 90 minutes or 120 minutes, if that’s what it is.

Gateshead manager Gary Mills wants the team to be focussed:-

When you get to Wembley, there’s a lot of things to sort out. It can quite easily take away why we’re going there. It’s important we get all that out the way, and then totally focus on training and preparing for a very important 90 minutes of football. It’s exactly that and nothing else for me.

We’ve done so well to get there. But a few people have said to me ‘

whatever happens against Grimsby, you’ve done superbly to get into the play-offs’, and it just made me think ‘There’s no way I’m accepting that I’ve done well if I lose to Grimsby’.

Yes, I’m honestly proud we’ve got to Wembley. But if we lose then we’re on the same level as all the other teams that haven’t gone up out of the Conference. I’ve got to make sure that doesn’t happen.

I’ve got to make sure that we go to Hartlepool United next season, and a lot of other League Two grounds that a lot of supporters have never

That’s inspiring, it’s a breath of fresh air. It gives everybody a lift. So that’s my aim. I know exactly what I want to do, I think my experience of going there with York City two years ago is massive.

And if I see anything from anybody within the dressing room unfocused, then it could cost them their place. Simple as that. Because I know it’s important that we are prepared properly.

Previous: Jake Gosling Decides to Move on
Next: Former Grecians Given Management Roles by Eastleigh