You have to wonder what goes through the minds of the coaching staff during the week that allows them to lay the team out in the way they did today. On Friday we earned a good point away to promotion chasing Chesterfield, and that probably should have been three points.

Move on to Easter Monday and we play officially the worse team in the Football League. A Devon derby against Torquay United when the Grecians have won every Devon derby game so far this season.

missing, but puzzled by the absence of Matt Grimes. A 4-4-1-1 formation that left Tom Nichols exposed at the top.

However, a goal by Bennett after 17 minutes should have meant that the Grecians could have pushed on  to a great win. However the tactic was to let Torquay have the ball. Scot Bennett explains this astonishing tactic:-

In the first half it didn’t look like we were quite comfortable, but the game plan was to allow them to have the ball because they were never really creating anything.

However Paul Tisdale was not accepting any blame for this awful defeat:-

I’m disappointed, and I have to temper that with thoughts of the last two games. As much as it hurts and I’m upset and disappointed, I have to make sure that we keep our focus and togetherness going into the final two games. 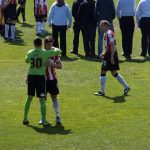 This weekend has been symptomatic of our form and our play and our team. At Chesterfield on Friday we looked like a promotion team and we should have won the game easily, albeit we couldn’t put the ball in the net to get a second.

The fans were quite unequivocal about where the blame lies. The Big Bank clearly demanded that David Wheeler were brought on, and when he did he opened the game up for the Grecians, but came on an hour too late. Substitute John O’Flynn lasted 34 minutes before he was substituted by Matt Grimes. John O’Flynn

was the prefect professional on his substitution, when he quite rightly could have been angry. The Big Bank again went full in the the cry, aimed at Tisdale, of “You don’t know what you’re doing”.

A sad day for Grecian fans. We could have all but confirmed safety from relegation to the Conference. Instead the wrong tactics were employed allowing Chris Hargreaves side to take advantage and take down south all 3 points.