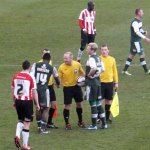 Hopefully this coming Saturday the referee will not be the centre of attention! Rochdale will be the visitors on Saturday 22nd February in a League 2 match. Kick off is at 3pm, and tickets are available from the ticket booths or it’s pay on the gate for the Big Bank.

The match day officials are:

We saw Andy Woolmer last season for the Devon derby which we drew 1-1 with Argyle. The referee sent off Argyle’s Maxime Blanchard.

Prior to that, it’s back to the 2004/05 season when we last saw Woolmer. On Saturday 29 September 2004 the Grecians visited the Kassam and earned a 2-2 draw, with Chris Todd being booked.

The previous season he reffed us twice. the home 1-1 draw with Dagenham and Redbridge, sending off the Daggers Kimble. He also officiated the FA Trophy tie at the Rec which Aldershot won 2-1, but Steve Flack had a late goal disallowed late in the game after the female assistant flagged him offside.

Previous: Another Kellow’s Bootlaces is live – 17th February
Next: A Fond Farewell From Alan Gow