Home » Exeter City News » Next up: Portsmouth at Home

With the continued wet weather rendering chances of the match going ahead on Saturday unlikely at best, this preview is probably moot, but should the rain clear up Paul Tisdale goes into the match with Portsmouth in buoyant mood having stopped the rot with a pair of very creditable draws against promotion 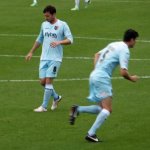 Goals continue to be a worry – City have scored just three goals in 2014 so far and all three have been Own Goals – and John O’Flynn made a lively return to the starting line-up at Burton, his shot leading to City’s goal. Matt Oakley continues his rehabilitation from the bench and, while he is nowhere near match fit he could be called upon to provide a calm head in the last 30 minutes or so if need be. Matt Gill missed out on the trip to Burton and will hope to return on Saturday.

This season was always going to be one of rebuilding for Portsmouth after their well-documented off-field problems. Now under the auspices of the supporters, Pompey’s first task is to clear the club’s debts and consolidate before building back up for a return to the higher echelons of the pyramid. Matching their off-field struggles it has been a struggle on the pitch too, with Guy Whittingham paying the price for Portsmouth’s poor form. His replacement (after Tisdale was interviewed for the job) was Richie Barker, whose interest in the job is

thought to have hastened his departure from Crawley Town. There has been little noticeable improvement however, although in a tight division a victory could make a huge difference. Goals have been hard to come by, with joint top scorers in Patrick Agyemang and the now departed David Connolly with five each. The return at Fratton Park was a 3-2 thriller – Portsmouth led 3-0 through Holmes and a pair from Bird before Coles and O’Flynn set up a grandstand finish.

The last meeting between at the sides at the Park (pre-season friendlies notwithstanding) was a 2-1 FA Cup win for the visitors in 1992, while the last league meeting was a 1-1 draw back in the 82/83 season. Overall Portsmouth enjoy a healthy Football League head-to-head lead, with 10 wins to City’s 2 (5 draws).

Previous: Issue 3 of Some Sunny Day on Sale Saturday
Next: Match Officials: Portsmouth at Home