After much confusion and various statements, tonight Oxford United have confirmed that Chris Wilder has tendered his resignation and this has been accepted by the Oxford United board. They have also said that a

compensation package with another League 2 Club has been agreed. It is therefore expected that Northampton Town will be announcing Chris Wilder as their new manager. Wilder has not had any previous connection with the Cobblers as a player or as a coach.

In terms of Tuesday night’s game at St James Park, Oxford have said “Assistant Manager, Mickey Lewis, has agreed to become Caretaker Manager with immediate effect and he will be in charge as the First Team travel to Exeter City on Tuesday night.

First and foremost we thank Chris for five years of service at Oxford United. He has worked very hard and helped move the club from the Conference to becoming an established League 2 side. We are grateful for his efforts on behalf of Oxford but disappointed that he chose not to continue to the end of this season’s journey.

Today the formalities were completed to allow him to move on. The other club involved have acted professionally throughout the process and the two clubs have agreed a compensation deal that is satisfactory to Oxford United.

We now move into a new era for Oxford United. The club has already started a thorough, professional search and interview process for the next permanent Manager.

Northampton Town have said this evening:- 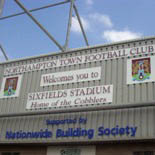 The club have agreed compensation terms with Oxford United and Oxford have confirmed that Wilder has terminated his contract.