An interesting day at the Park where 2 goals scored and a point won seems almost incidental to the events. Perhaps a sea-change in the fortunes of Exeter City FC was witnessed today.

Bury came to Exeter with some familiar faces. Former Grecian Ronnie Jepson is now in charge at Bury, plus they’d secured the services of Dan Nardiello.

The line-up for this game showed no changes in the line-up to the side that struggled against a physical Wycombe Wanderers. But it only took 15 minutes for Bury to find their way through the Exeter defence, and of course the scorer just had to be an ex-Grecian in the shape of Daniel Nardiello.

Could Exeter get back in the game? Defensively City looked suspect, and lacked leadership. In particular one player at the heart of defence looked like he didn’t care. Danny Coles was to get much of the blame of another poor performance and at every set piece we looked vulnerable from Bury headers.

David Wheeler was having an excellent game, capped off with his first goal for Exeter in the 41st minute. It was his

substitution along with Danny Coles on 77 minutes that caused all the friction between the fans and Paul Tisdale. The fans were not happy at Tisdale taking off one of our best players and booed that decision, but gave Wheeler a standing ovation as he left the field. But the substitution of Danny Coles was greeted with loud cheers, as fans were relieved that he was removed from the game. Paul Tisdale then gave an ironic clap to the Big Bank. The Big Bank responded with a chant of “you don’t know what you’re doing”.

The substitutions worked. At least Exeter got an equaliser through Tom Nichols. A second draw in the week for the Grecians, having come from behind in both games.

I’d say that was the best game David has played for us by a distance – he was one of our best couple of players today.

It’s not about that – it’s about ‘how do we score a goal’. If we’re practicing a formation with certain players doing certain things all week, if someone happens to have a good game and we need a goal and we’ve practiced stuff, then what do I do?

Danny Coles was clearly unhappy with how he treated by the fans yesterday and took to Twitter to vent his frustration. 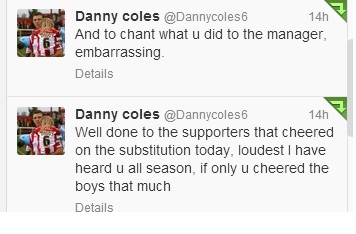 Though in response to one Exeter City fan he did say ‘never said I was pleased with my performance did I, read the tweet again.’

No game next Saturday, Accrington Stanley away on the 14th December will be the next match. With the loan transfer window now closed until January any solution to the problems that exist within the team will have to be fixed from within the current squad.

Previous: Daniel Nardiello: Bury ‘the perfect club’
Next: Nichols on his Goal Against Bury: “It’s a very good feeling”