Transfer deadline yesterday saw Dan Seaborne, aged 26, leave Championship side Yeovil Town and join League 1 Coventry City on loan. The loan is until January, with what seems to be a consideration for a permanent move when the transfer window re-opens. Dan Seaborne led the Grecians as captain when Exeter beat Cambridge United at Wembley to secure League football. 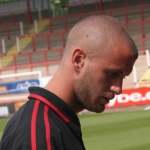 Danny has the ability to be a strong and imposing figure in the heart of the back four and I’m delighted we’ve been able to bring a player of his calibre to the club.

We tried to bring him in in the summer but circumstances and the offer of Championship football meant we couldn’t quite get a deal done however I’m delighted we now have him on board.

Our players have been working exceptionally hard this season but because of the relatively small depth to our squad the players will certainly welcome his addition and experience.

We covered his move from Southampton to Yeovil Town in the summer here.

Dan has joined Coventry to get games, Byron Webster and Shane Duffy have been playing well and I also have Liam Fontaine so it is only fair for Dan to go out and get some game time under his belt.

Previous: Tickets for Torquay Xmas Away to go on Sale
Next: Saturday Sees Some Sunny Day go on Sale