Despite the best efforts of local groups to halt the demolition of the Don Valley Stadium, Sheffield Council have given the go ahead and work is expected to start on 21st November. The work is likely to take 6 months.

The stadium was built in 1991 for the World Student Games. Its had some notable days, Kelly Holmes raced her last race at the stadium. Local athlete Jessica Ennis-Hill was to have the stadium named after her in recognition of her record as an Olympian.

But it’s not just for Athletics that it is known. The Rolling Stones. Def Leppard. U2. Arctic Monkeys. Exeter City FC. Over the years, the Don Valley stadium has played host to all the great names in entertainment.

Of course, for Exeter City fans the world over, Saturday 2nd May 2009 is the key day and our only

visit to the stadium. The Grecians needed 3 points against Rotherham United to gain automatic promotion. City fans turned up in their droves, coaches, cars and trams full of red and white bedraggled supporters. The bar under the stand packed to the rafters, even though they sold no cider.

The main stand for away supporters soon filled up and the stewards moved the netting along a block to let more City fans in to sit down. An exercise repeated on several occasions as over 2500 spectators arrived on this sunny day. They said you couldn’t create an atmosphere at the Don Valley, but clearly the Exeter fans

were unaware of that fact.

0-0 until 71 minutes. Logan had come on for Liam Sercombe 10 minutes earlier. The nerves of the City faithful truly shredded. But not that of Rob Edwards, who sent in a peach of a cross to the far post where Logan rose majestically to plant the ball in to the back of the net. Stuart Fleetwood’s penalty miss 4 minutes later

was irrelevant as Exeter won 1-0 and promotion to League 1 was duly won.

A mass invasion of the pitch by delighted City supporters ensued on the final whistle of course.

Rotherham United moved to a brand new stadium the New York Stadium, near to their old Millmoor ground at the beginning of the 2012/13 season.

A piece of Exeter City history will now be demolish.

2 videos to watch, the first up is what the stadium looked like on the day, the 2nd is Logan’s goal. 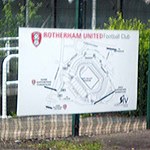 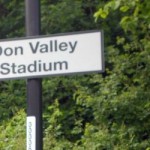 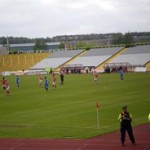 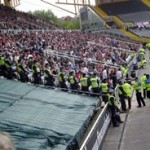 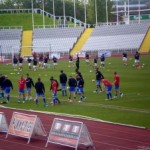 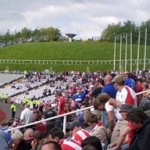 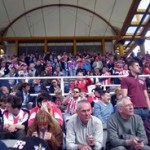 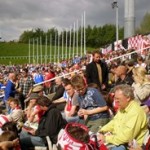 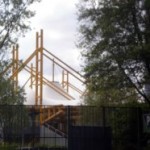