Exeter City Football Club will  be running the annual Charity Santa Dash again this year. This year’s event will  take place on the day of the Bury home game, which is Saturday 30th November.

The event leaves at 1.15pm from the Guildhall on the High Street. Entrants can dash, walk or amble up to the stadium. 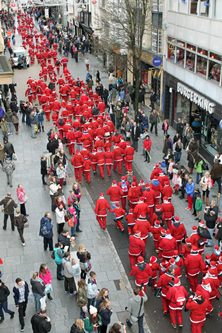 All Dashers will be raising money for a range of charities close to their own hearts.  Half of the proceeds will go towards the club’s Football in the Community programme – a registered charity that engages over 50,000 people in Exeter and Devon every year – and the other half to the entrant’s elected charity.

To enter this event will cost £17 for adults and £5 for under-18s.  Included in the price is a place in the Santa Dash, a Santa costume, and a ticket for the Exeter City v Bury match.

We’re delighted to be hosting such an enjoyable and worthwhile event once again this year.  It’s a great opportunity for people of Exeter, whether they’re football fans or not, to have a bit of fun while raising loads of cash for causes that mean something to them.

It is a real spectacle to see hundreds of Santas running through the city centre and we’re hoping to get a record number of participants this year that take on the festive spirit and join us in the Dash.

Anyone interested in entering the City Santa Dash can either enquire at Reception at St James Park or contact David Evans by ringing 07827 871 723 or by emailing [email protected]. A PDF file with an entry form can be found here. 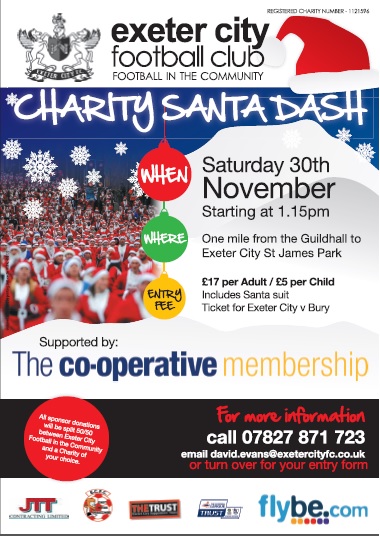