After the drama of a Devon Derby victory over Plymouth Argyle, the Grecians entertain Hartlepool United at St James Park. Kick off is at 3pm on Saturday (12th October), and normal ticketing arrangement apply – ticket booths or pay at the turnstile for the Big Bank.

Davies reffed the opening game of last season, the home game to Morecambe which Exeter City lost 3-0. He also reffed the game at Wycombe Wanderers last season played on New Year’s Day. Sending off a petulant Jamie Cureton before John O’Flynn gave the travelling supporters a Xmas treat with a late winner. 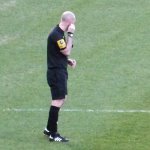 Previous: Home Office Release Numbers on Football Arrests and Banning Orders
Next: Next Up: Hartlepool at Home