The new season is upon us, and it’s also the very first round of the FA Cup this weekend (17 August 2013). First set of games kick the FA Cup tournament off tonight.

A number of ties are of interest to Devonians. 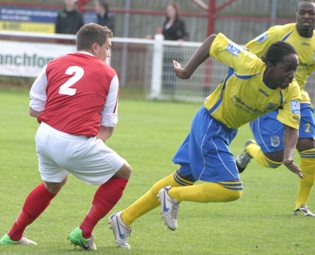 Willand Rovers of the Toolstation Premier Division take on Larkhall Athletic from the same division. Willand have lost their 2 opening games. But will be hosting Bath based Larkhall in a 3pm kick off.

Tavistock AFC are away in Cornwall at St Blazey. The Lambs have had an awful start to the season, in the Carlsberg South West Peninsula Premier league, losing 4-1 to Exmouth Town then 5-1 at Elmore. St Blazey play in the same League and who themselves were beaten 8-1 on the opening day of the season by Saltash Utd.

Ilfracombe Town are also away in Cornwall, at AFC At Austell. Ilfracombe has also had a poor start to the season, losing both of their Toolstation Western League Premier Division games. St Austell have played only the 1 game in the Carlsberg South West Peninsula Premier league, losing 2-0 to Godolphin Atlantic.

Buckland Athletic are top of the Toolstation Western League Premier Division, having won their 2 opening games, and will be full of confidence for this FA Cup tie against Toolstation Western Football League -Premier Division side Wells City. Buckland lost 2-0 to Exeter City in the pre-season. Buckland had a good run on the Cup last season, making it to the 2nd qualifying round before losing 2-1 to Bath City.

Western League First Division side Barnstable Town   host Brislington from the division above. Barnstable have won their opening 2 league games, so will be confident that they can beat Brislington who have taken only 1 point from their 2 games.

Plymouth Parkway of the South West Peninsula Premier league also have Cornish opponents in Saltash United. from the same league. Parkway have won their 2 opening games, while Saltash have won 1 and lost 1. Should be a home win.

There are 10 ties kicking off tonight. If you at home on Saturday, then there is one live game for you to take in on the internet. Parkgate and Shirebrook Town tie on Saturday afternoon will be shown on http://falive.tv/