Exeter City travelled to Norwich City lying in 20th position in Division 3 (South). Optimism would have been high having taken 5 points from 6 in the last 3 games, with those 3 games seeing 17 goals. Norwich were sitting in 6th position but struggling to find any consistency, and having already lost 7-1 and 7-3 in the last 3 months. Goals then were on the cards, and so that proved.

Norwich were able to name an unchanged side, but Exeter had to make 5 changes due to injury after their 4-3 win over Colchester United. A noticeable absentee was former England international, Johnny Nichols.

Nethercott Saves: This fierce shot by Churms, the Exeter inside-forward, was a real test for Nethercott, but he brought off a fine save.

The Canaries took a little while to settle, but in the 5th minute they took the lead. Norwich’s Gordon started the move with a clever pass to Hunt, who smartly switched the ball out to Gavin; Gavin slipped it neatly inside to Gordon; the inside-forward’s shot was too hot for Exeter’s Hunter to hold and GAVIN closing in, nodded the ball into the net.

Exeter retaliated strongly, but although they had a corner, conceded by McCrohan, they did not bring Nethercott into action and in the next attack Gordon, fed by, Hunt, slammed in a shot that grazed the Exeter crossbar.

In the 10th minute Norwich went further ahead. Hunt, playing extremely well, began this move with a headed pass to Brennan. Brennan sent COXON away and the winger cut inside Harvey before letting fly with a right-foot shot that flashed like a rocket into the far corner of the net.

Coxon Scores. Hunter, the Exeter City goalkeeper was beaten all the way by this fine shot from Coxon which entered the corner of the net for Norwich’s second goal.

But this Exeter defence was wide open to the probings of the Norwich attack. Once a rather lucky rebound prevented Gavin from getting in a shot and soon afterwards a perfect move ended with a Gordon centre and a Gavin header that flashed viciously over the bar.

In the closing minutes of the half the game really livened up. Brennan put in a beautiful run before slipping a through pass to Hunt. The inside-forward was brought down badly in the middle of the penalty area and the referee had no hesitation at all in pointing to the spot.

In the last minute of the half, GAVIN stepped up and drove his spot kick high in to the corner of the net to mark his side’s third goal and his own 20th of the season.

In the 51st minute, however Exeter reduced the lead. Dale put a shrewd pass out to Rees and when the inside man centred, Ashman fisted the ball away from under the bar. There was no question about it being a penalty and Calland made no mistake from the spot.

In the 61st minute a tragedy put Exeter right back in the fight. Calland moved out to the right, cut inside and slammed in a shot from point blank range. Nethercott beat it down, but it smacked straight in to a helpless ASHMAN and rebounded from him in to the net.

This goal put a completely different aspect on the game and with Norwich beginning to look a trifle ragged Exeter came right back into the picture. It was the visitors who were now producing the cooler football and there was brisk work f 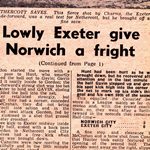 or the Norwich defence before Coxon and tried to get through in successive attacks.

The equaliser almost came when John crossed a good centre after neat work on the right wing and Wilson glanced the ball just wide.

There was little to shout about in the closing minutes, except for a Coxon free-kick taken when Brennan was brought down just outside the penalty area. Coxon put all his power behind the shot, but Hunter dived and turned it away brilliantly for a corner.

Notes. This was the last season for the Division 3 South. Exeter finished bottom. Norwich had a poor end to the season and missed out on promotion.

The report has been lifted from the newspaper Eastern Football News, The Pink ‘Un. See below for a scanned copy of the match report. 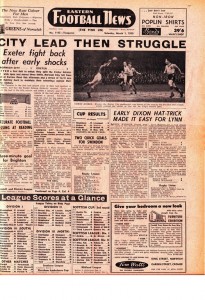