As pre-seasons go, this has been one of the worst in recent years for City fans. Not a signing to talk about (yet), top scorer Jamie Cureton heading up the M5 to Cheltenham and Paul Tisdale saying we could struggle this season due to a lack of funds. All in all it makes for pretty grim reading, which can’t have helped season ticket sales.

There is something that does offer much needed optimism, though. With new signings set to be limited at one or two, City’s youngsters will get their chance to impress. Jamie Reid is one of these exciting prospects. The 18 year-old, who was recently given his first Northern Ireland U21 cap, possesses the strength and pace that could give League Two defen 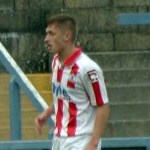 There’s also Jake Gosling, who is already a fan favourite for knocking Argyle out of the FA Cup when on loan at Dorchester last season. The enthusiastic winger is still raw, but has the pace and bravery needed to excel in the Football League.

Left/centre back Jordan Moore-Taylor impressed during his handful of appearances last term, particularly in the final home game against Cheltenham, where he put Danny Coles’ distribution to shame with an array of magnificent cross-field balls. His future looks bright and you feel the coming season will be a big one for the 19 year-old.

The same has to be said for Aaron Dawson. The 21 year-old has been played in a number of positions by Tis, but right-back is where he looks most at home. Last season’s contingent in that position has been depleted with Kevin Amankwaah

leaving and veteran campaigner Steve Tully looking increasingly past his best, so Dawson has a chance to establish himself as the campaign progresses.

As will Tom Nichols, who’s struggled to break into the first team and has been loaned out to Hereford, Bath and Dorchester in recent seasons. He’s still young at 19, but with Cureton joining Cheltenham and O’Flynn yet to sign a new deal, now is surely the time for Nichols to stake his claim as one of City’s attacking options.

Then we come to the youngsters who we’ve seen virtually nothing of, at least in the first team that is. Myles Anderson, who then Blackburn manager Steve Kean said “could become something of a Chris Smalling” when the son of agent Jerome Anderson joined from Aberdeen in 2011, came on at Chesterfield in last season’s finale but remains a bit of an unknown. The 22 year-old is a late developer and has yet to start a senior league match in his career, so will this be the season that a new gem is found?

There’s also Jacob Cane, Matt Grimes and Christy Pym – youngsters who we could see more of this season, particularly 18 year-old Pym, who looks set to be back-up for Artur Krysiak.

Paul Tisdale has spoken in the past about his ‘cycles’. The first of his reign peaked with the eighth placed finish in League One in 2010, but it’s been a struggle ever since key players of that high-flying side left for pastures new. Last season’s side was built with the aim of stopping the rot and it succeeded. The aim for Tis now though, will be to emulate his previous successes with the emerging crop of promising youngsters.

Previous: Danny Coles Leadership Will be Key Next Season
Next: Fleetwood Player Banned for 2 Years