Last game of the season for Exeter City, will see them play at Chesterfield. Nothing at stake in this League 2 game, other than for the right to finish above the opposition team in the table.

Kick off is at 3pm, tickets can be bought at City’;s reception, or at the away ticket booth. No cash at the turnstile.

Match officials have been confirmed by the Football League; They are:- 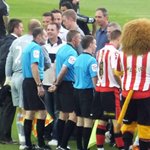 Games that he reffed in:-

Previous: Congratulations to Mansfield Town
Next: Next Up: Chesterfield Away