With Exeter City away in Essex at Southend, it was the FA Cup for me. Having checked mileage and wanting to do a new ground the only option was down to Privett Park, home of Gosport Borough. Having done a few articles 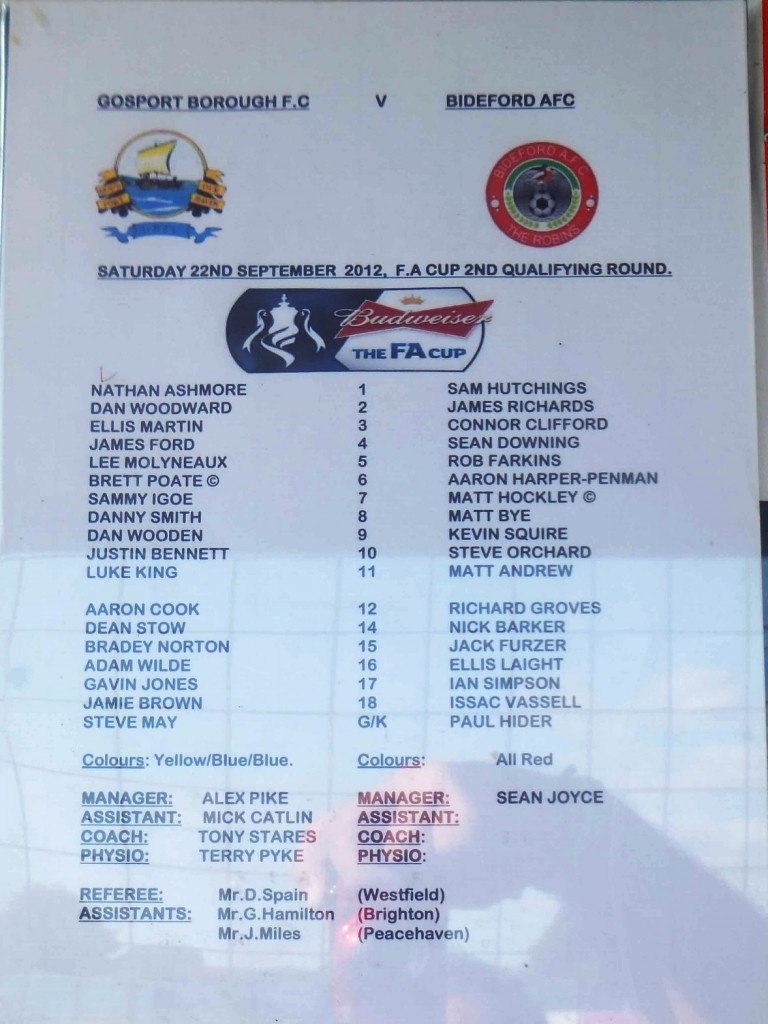 for Exeweb on the progress of Devon non league clubs, then this tie had the advantage of seeing one of those teams in action.

The line up for Bideford AFC included Matty Bye, who’d played 1 game for the Grecians in 2006, plus on the bench was former City youth player Jack Furzer.

Bideford’s recent record has not been good, and it showed in the early stages of the game, Gosport Borough piled on all the pressure. Plenty of chances for Borough including an attempt cleared off the line, and one that whizzed by the post. Borough finally went ahead after 25 minutes. A short corner was played to Borough’s Captain Brett Poate, who curled a shot to the bottom left hand corner using the post to evade Bideford’s keeper.

Borough kept up the pressure, forcing a number of corners, and in the 38th minute extended their lead to 2-0 when Luke King had simple tap in from a Justin Bennett cross.

Bideford came out more focussed in the 2nd half, but couldn’t make any of their possession tell. The referee also frustrated the North Devon, by penalising them for merest of touches on the opposition. Indeed Jack Furzer was booked within minutes of coming on for an innocuous challenge.

Nathan Ashmore had one great save to make in the second half, but otherwise wasn’t overly taxed in Borough’s goal.

Borough went back to controlling the game, and fully deserved their 2-0 win, and a rare

venture in to the 3rd qualifying round. 232 turned up on this lovely sunny afternoon.

A lot for Bideford to work on to improve their league standing. Matt Bye was quite quiet, unable to exert much influence.

Not a good day for Devon then, as the other Devon representatives, Buckland Athletic went out after losing 2-1 to Bath City. Bath City will host Gosport Borough in the next round.

Previous: Standing on the Terraces
Next: Engineering works on the Tarka Line this Saturday 29th September