With 2 games played by teams on Saturday and last night (Tuesday 18th Sept) its worth looking at how all the clubs in League 2 fared.

Gillingham had 2 home games and won both. A comprehensive 4-0 win over Bristol Rovers with 2 goals from Kedwell, and a singles from Lee and Whelpdale added to Rovers woes. This was followed up by a 1-0 win over Southend United, with Kedwell scorng his second penalty in 2 games. Gillingham stay top with 19 points out of 21.

Another in form team is Port Vale. An away win at Plymouth Argyle, with goals from Myrie-Williams, Vincent and Williamson was followed up by a goal spree at at fancied Fleetwood Town. 2 from Pope to keep him top of the goal scoring charts for L2, 1 from Vincent and 2 from Dodds in a 5-2 win over Fleetwood. Port Vale lie in 2nd place.

4 points from the 2 home games for Exeter City saw them in the auto places. An O’Flynn equaliser gave City a 1-1 draw with improving York City, this was followed up by a tricky 3-2 win over struggling Wycombe Wanderers.

Exeter twice fell behind, but goals from Davies, Cureton and a clever back heel from Coles saw the 3 points go to the Devon club.

Mixed fortunes for Fleetwood Town. A 1-0 win over Northampton Town with a goal from Mangan, was followed up with a disappointing 5-2 reverse against Port Vale. Brown and a Gillespie penalty being the Cod Army’s scorers. The defeat saw them drop out of the autos.

Bradford City have recovered from a disappointing start to the season, taking full advantage of their 2 games at home. Saturday saw them beat bottom of the table club Barnet 3-0, with goals from Hanson, Connell and Davies. This was then followed up with another 3 goals, this time against Morecambe who replied with 1. Goals from Hanson, Reid and Jones. The wins upped Bradford to 5th in the table.

Burton Albion are another team struggling to find any consistency, but have had 2 good home games. On Saturday they hit 4 against hapless Oxford, with braces from Zola and Maghoma. Against York on Wednesday night, they hit 3 with goals from Bell, Zola and Paterson, with York having taken the lead. Burton finish the night in a play off place.

Accrington Stanley slipped down the table having collected just the 1 point from their travels. A late equaliser by Murphy earned them a 1-1 draw at Dagenham and Redbridge. A 7 goal thriller at Chesterfield saw an excellent Accrington go

down 4-3. Liddle being sent off when the score where 3-3 would not have helped. Scorers for Accrington were 2 from Boco and a Murphy goal.

Northampton Town had mixed fortunes. Losing 1-0 at Fleetwood on Saturday, but followed up with a 1-0 over Dagenham and Redbridge, their goal coming from Akinfenwa. The Cobblers occupy a place just outside the last play off place.

Former League 1 team Rochdale are another team that has enjoyed the last 2 games away from Spotland. Adebola and Grant scoring in a 2-1 win over struggling Wimbledon. They then followed this up with a great w

in at the New York Stadium against Rotherham. Goals from Adebola, a penalty from Grant, and McIntyre meant that Rochdale inflicted the first defeat in the league at the new stadium for Rotherham, Rochdale being 2-1 down at one stage and go 8th in the table.

Cheltenham Town had 2 home games to make an impression at the top end of the table. Despite a McGlashan goal, the Robins lost 3-1 to Southend United. However, Cheltenhammade up for the disappointment with a 2-1 win over out of form Oxford United. Goals coming from Carter and Harrad.

An interesting week for Rotherham United. Manager Steve Evans having a 6 match stadium ban, a bust up with former Grecian David Noble, following a 6-2 defeat at Port Vale all meat that they had to let the action on the pitch do their talking. Torquay United were the visitors on Saturday, and gave up with a whimper. Revell scoring for Rotherham. Then Tuesday night, despite taking a 2-1 lead through Revell and former Grecian Dan Nardiello, lost 3-2 toRochdale.

Another League 1 team, Chesterfield, also had a good week taking a maximum 6 points from their 2 home games and scoring 7 goals to boot. Struggling Wycombe Wanderers were the first victims. Goals from Atkinson, Lester and Hird doing the damage in a 3-1 win. Next up was Accrington Stanley, and despite manager Tommy Wright not being happy, did manage to beat them 4-3. Goals coming from Lester (2), Richards and  Forbes.

Torquay United continue to struggle to find any winning form. 3 points from their 2 games. Having whimpered to a 1-0 defeat at Rotherham, they followed this up with a 1-0 win at struggling Wimbledon, their goal coming from Howe. The Gulls occupy mid-table. 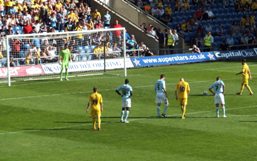 After a poor start to the season, Southend United have started to earn some points. An excellent 3-1 win at Cheltenham Town (goals from Clohessy, Assombalonga and Phillips), was followed up by a 1-0 defeat at table toppers Gillingham.

York City drew 1-1 on Saturday with high-flying Exeter City, with Coulson netting for York. So, just the 1 point for their efforts on the road after their 3-1 defeat to Burton Albion, despite having taken the lead through McLaughlin.

Having been 3rd in the table, Oxford United have now dropped to 16th, with 4 consecutive defeats and conceding 13 goals in those games. Saturday saw them lose 4-0 away to Burtonand followed this up with a 2-1 defeat at Cheltenham, a late Leven penalty offering little consolation.

Having promised so much, Morecambe are occupying a bottom half position in the table. A 0-0 at Aldershot on Saturday, was followed up by 3-1 defeat at in form Bradford City, Redshaw scoring for the Shrimpers.

Having won on the opening day, Aldershot have found winning elusive. A 0-0 at home toMorecambe, was followed up by a narrow 1-0 win over bottom team Barnet. A Reid goal to calm the nerves at the Rec.

With 2 home games, there was an opportunity for Plymouth Argyle to collect some points. However, in form Port Vale took away all 3 points from Home Park, with Williams netting early in the game for the Pilgrims. Tuesday night had fellow strugglers Bristol Rovers as the visitors. Hourihane gave Argyle the early lead, but Rovers fought back for a 1-1 draw. Manager Carl Fletcher attacking some sections of the crowd for their lack of backing to the team.

Wycombe Wanderers form that got them relegated from League 1, seems to be following them in to League 2. A 3-1 reverse at Chesterfield, an own goal beng scant consolation forWanderers, who also had Johnson sent off early in the game. Wycombe then had to travel to Devon to meet Exeter City. Despite taking the lead twice through Ainsworth and Morgan, were unable to hold on and lost 3-2.

With just 4 points for the season, Wimbledon needed some good results. However, Saturday saw them lose 2-1 to Rochdale, not helped by Midson being sent off, and a Luke Moore goal not enough for a result. Torquay‘s 1-0 win on Tuesday night was enough to cost Terry Brown his job. Wimbledon now close to the relegation zone.

Mark McGhee’s Bristol Rovers side are also without a win so far. A 4-0 defeat to top of the table Gillingham, was followed by a 1-1 draw down at Plymouth. A Parks equaliser givingRovers a point.

Former Grecian star, Mark Robson, is not having much luck at bottom of the table side Barnet. A 3-0 defeat at Bradford City was followed up by a 1-0 defeat at Aldershot. Leaving Barnetrooted to the bottom of League 2.

Previous: Santa Dash for Charity
Next: The Things You Need to Know – Whaddon Road