Home » Exeter City News » Next Up: Crystal Palace in the League Cup

Finally the new season is here. Forget the Olympics, forget Euro 2012 and forget the wet miserable summer. Real football is back, and we start the with the visit of Championship side Crystal Palace to St James Park.

Kick off is at 7.45pm on Tuesday (14th August). If level at full time, then an additional 30 minutes is played, and if still level the tie will be decided on penalties.

We previewed the tie back in June when the draw was made, here. We said:-

It’s been a while since we played the Glaziers (or Eagles as they are now nicknamed). All the way back to Christmas 1960, were we played them on consecutive days. Losing 3-2 at St James Park, with Jenkins and Thompson scoring for Exeter in front of 7551 fans. Then drawing the following day at Selhurst Park 0-0

We’re are, however, old protagonists from the Division 3 South days. We have played them 62 times in the league, with City winning 20 games,  drawing 17 and losing 25. Scoring 104 goals to Palace’s 108.

The game will, of course, mean that we welcome Dean Moxey back to the Park. His fist competitive match against the Grecians since his transfer to Derby County.

Entry price details were discussed here. Which were:- 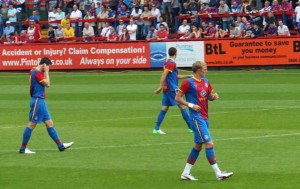 Crystal Palace fans might want to have a look at our ground guide, which is fairly honest description! http://www.exeweb.com/2012/05/29/the-things-you-need-to-know-st-james-park-exeter/

The AS9 Foundation will be unveiling a memorial to Adam Stansfield. This is their announcement

The Foundation are pleased to announce that we will be match ball sponsors on Tuesday night for Exeter City’s cup match against Crystal Palace. We will be holding a bucket collection before kick off and at half-time to raise valuable funds for the Foundation.

We are also pleased to announce that at 7pm we will be unveiling a tribute to Adam on the rear of the Flybe Stand. You are all invited to join us for this very special moment on a night where we can all remember Adam. Please tell your friends and we look forward to seeing many of you on Tuesday night.

Having watched Crystal Palace at Aldershot recently, I would suggest that the player to watch

is Wilfried Zaha, their number 16 and a striker. Palace are a strong organised side, and will take some breaking down. Exeter City will need to shake off the pre-season friendly commitment to get a rare result in the League Cup.

Last reffed Exeter City in their 2-0 defeat at Colchester on New Year’s Eve last season. He sent off Danny Coles, being the fall guy that we always have to put up with at Colchester!