A good news week. 2 new players join the Grecians and no one left. We have some details on former players moving on. A couple of youngsters look to be going out on loan. We have some news about the JPT draw, and we take a look at some upcoming oppositions.

According to the Dorset Echo story 2 of our youth players are going on loan to Dorchester –http://www.dorsetecho.co.uk/sport/9844559.Simkin_to_swoop_for_Exeter_pair/

Exeter have added experience to their squad by completing deals for on-trial duo Matt Oakley and Jamie Cureton. Cureton, the 2010-11 Exeter Player of the Year and top scorer, returns to St James’ Park for a third spell having spent the tail end of last season on loan at City, in a move sponsored by  <… more …>

The draw for Round 1 of the Johnstone’s Paint Trophy will be made on Saturday 18th August. The draw will take place whilst many football fans will be on their way to the opening fixture of the season, which for Exeter City fans will be home to – <… more …>

With our opponents in our first away game of the new season taking on our opponents in the League Cup just 15 minutes walk away, it was a fortuitous opportunity to take a look at the 2 teams. Aldershot were hosting – <… more …> 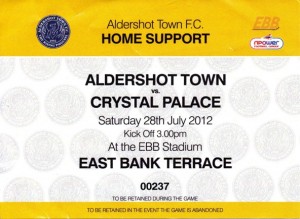 Fancy yourself as a sports photographer? The Club is looking for a second photographer – http://www.exetercityfc.co.uk/news/article/photographer-wanted-289517.aspx

George Friend moves to Middlesbrough – http://www.doncasterroversfc.co.uk/news/article/friend-joins-boro-280117.aspx No sign-on fee or any other add-on is due to Exeter City. We understand.

Chris Shephard, released by Exeter City at the end of the season, has moved on to Eastbourne Borough – http://nonleague.pitchero.com/news/boro-bag-ex-grecian-15010/

And finally …
Chris Zebroski. So much part of success for Exeter City whilst at Oxford Utd and Torquay, has now moved on to Cheltenham Town – http://www.ctfc.com/news/article/zebroski-signs-286770.aspx