A warm welcome to the Cat and Fiddle and St James Park to Rhys Karl Evans, aged 30. Former England under 21 player and signed to Chelsea. Although he was with Chelsea for 5 years, he never actually played for them. But did go loan to Bristol Rovers, QPR and Leyton Orient. He eventually signed for Swindon in 2003 and made 118 appearances for the Robins.

A bit of a journeyman, Rhys moved to Blackpool in 2006 making 32 appearances and also 4 out on loan at Bradford City. In 2008 he made 21 appearances for Millwall, then 45 for Bradford City in League 2 (including appearing in a 1-0 defeat to City at St James Park). From there back to Bristol Rovers for 3 games, then the following season (2010/11) at Southend for 13 games. Last season he pitched up at Staines Town for 11 games. 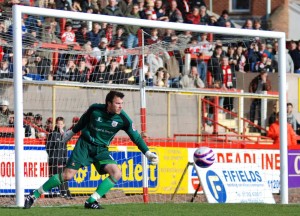 Rhys Evans shown in the photos playing for Bradford City in a League 2 game. Photographs courtesy of Keith Stone, AS9 Foundation.

Previous: The Things You Need to Know – Memorial Ground
Next: The New Season for Exeter City is Ready to Go!