For the second time this season City have dropped points by conceding twice after the fourth official has done his business with the numbers board, and what should have been a weekend where City were back to winning ways is instead one where City return home with one point from six. Part of City’s 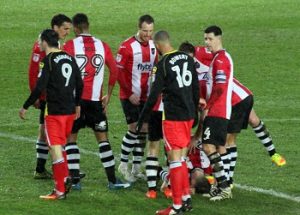 recent revival has been down to the continuity afforded a winning side with most players returned to fitness, but Paul Tisdale will be forced into one change after Jake Taylor’s needless red card at Notts County on Tuesday. It would appear that three options are open to Tisdale as to his replacement – a more like for like swap with Jordan Tillson coming in, or to bring in either Joel Grant or Liam McAlinden which would necessitate a change of shape.

Stevenage, thanks to four successive wins, have crept almost unnoticed into the playoff mix, their 2-1 win over strugglers Cheltenham on Tuesday night moving Boro into 9th place in the table. Darren Sarll’s side has through the season tended towards runs of good and bad form – the current run coming

after Stevenage had lost five of their previous six fixtures (their only win against basement side Newport). Key to their recent success has been Matt Godden, who has eight goals from his last seven games and 16 in total, while Jobi McAnuff in midfield provides plenty of higher level experience.

Back in September City overcame the early red card shown to skipper Jordan Moore-Taylor for a professional foul to overcome a lacklustre Stevenage side 2-0 thanks to second half goals in quick succession from Lee Holmes and Ollie Watkins. The corresponding fixture last season saw Sky viewers given a treat with a thrilling 3-3 draw. David Wheeler gave City an

early lead which was doubled when Clinton Morrison finally opened his City account with a spectacular overhead kick. By half time it was 2-2, however, thanks to goals from Parrett and Kennedy. Wheeler scored a fine volley late on to seemingly secure the points, only for another fine goal from Whelpdale to give Stevenage a share of the spoils. City have a slight league head to head lead with six wins to Stevenage’s 4, but like with Notts County on Tuesday, betting people might look to the draw as there have been seven of those in this fixture.

The match officials are:

Darren has refereed two Exeter games, the most recent being the away win at Hartlepool in January. Details of those two matches can be found at http://www.grecians.co.uk/wordpress/?s=Darren+Handley

The last game between the two sides was the televised game in October 2015, line up and video can be found at http://www.grecians.co.uk/wordpress/?sp_event=4101

Previous: Next Up: Notts county vs Exeter City
Next: Ryan Swan Signs for Exeter